4th Generation
LED
with the Advanced and Patented
S-COB
TECHNOLOGY


LED stands for Light-Emitting Diode. LEDs are small light sources that become illuminated by the movement of electrons through a semiconductor material.


LED  is the newest solid state lighting product. It Does not use glass and poisonous gases that pollute the air.

LED Lighting is safe to use, durable and economical. It does not only save money for consumers and industrial users by operating at a lower power consumption, it also helps protect the environment.

Save Money While Saving the Environment

Though currently more expensive to purchase up front, LED lighting fixtures will save you in long-term operational costs. LED home lighting only uses one third of the energy that Incandescent bulb uses. An 18-watt LED light can replace a 75-watt Incandescent bulb or a 40-watt CFL Fluorescent Bulb; in the lifetime of that 18-watt LED light (which is ten times longer than the Incandescent or five times longer than CFL Bulbs) you will save 570 kilowatts of energy. This would be a rough savings of nearly 7,000 pesos on your energy bill. A LED light easily pays for itself in its lifetime.

Regular light bulbs put carbon dioxide, sulfur oxide and nuclear waste into the landfills and atmosphere. By changing your light bulbs to low energy LED home lighting, one single bulb keeps one half ton of carbon dioxide out of the atmosphere through its life cycle. It will also keep the sulfur oxide and nuclear waste to a minimum in the landfills and environment. By switching one bulb in your home and in every home throughout the Philippines, the environmental concerns being discussed with fervency these past couple of years can begin to be addressed on a global scale.

It is possible that if every house in the Philippines switched to LED lights, 90 current power plants could retire, an amazing fact especially considering that more power plants are being planned and constructed.

Staying conscious about the environment and being "environmentally friendly" doesn't mean you have to change the way you live completely, although if you did "go green" entirely, it certainly would have an amazing impact on the earth. You can increase your energy efficiency with small and simple changes that will actually benefit you as well as the environment. Saving money with LED lights in your home makes going "green" an easier pill to swallow, especially because you won't be able to tell the difference in the lighting.

LED light benefits expand to areas other than home lighting as well. Considering LED lights during the Christmas holiday is also a smart energy conservation idea. LED lights are cool and energy efficient during the time of year when energy use rises significantly.

LED lighting is being billed as the best long-term solution for your home and outdoor lighting needs. Its environmental benefits and energy efficiency make it worthwhile for your household and our world. 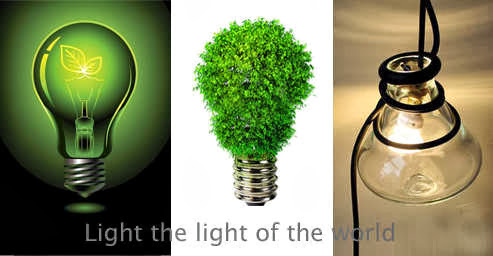 LED vs. CFL vs. Incandescent Bulb

How are LED lighting products different from other lighting, like fluorescent or incandescent?

For example, an incandescent or compact fluorescent (CFL) bulb inside of a recessed can will waste about half of the light that it produces, while a recessed down light with LEDs only produces light where it's needed - in the room below.

In a CFL, an electric current is driven through a tube containing gases. This reaction produces ultraviolet light that gets transformed into visible light by the fluorescent coating (called phosphor) on the inside of the tube. A CFL releases about 80% of its energy as heat.

LED lighting products use light emitting diodes to produce light very efficiently. The movement of electrons through a semiconductor material illuminates the tiny light sources we call LEDs. A small amount of heat is released backwards, into a heat sink, in a well-designed product; LEDs are basically cool to the touch.

GES uses S-COB (Stereoscopic Chips On Board) packaging technology, breaking the traditional LED package, the LED chip directly attached to the base, so that heat conduction performance is much higher than the common package, it makes the heat conduction not to rebound, LED chips heating quickly by the radiating base to attract and spread to the outside, so that the LED radiation problem effectively breakthrough. This provides for the future development of LED lighting products direction and guidance.

Due to cooling problems, in order to better heat conduction, the traditional LED lamp housing, the general use of aluminum alloy and other metal materials, and the base is connected into a whole. Its purpose is to better help the heat conduction, thereby prolonging the service life of the LED lamp. In the GES S-COB packaging technology, with a base heat, it can meet the demand, therefore, need makes the cost of expensive metal material to make the lamp housing. Fourth generation products of GES used the shell of the plastic material with superior quality and durability. This product has a longer life, better performance and price was reduced instead.

So, let LED lighting into the tens of thousands households, and let the unfortunate families can enjoy the LED light source, so that LED lighting civilian realize rapid popularization, this is the goal of GES.

BRIGHT, CLEAR LIGHT at LESS WATTAGE
At 110 to 140 lumens per watt, the GES 4th Generation LED gives the right brightness at less wattage. The 4th Generation 9-watt LED Bulb gives as much as or better brightness than a 23-watt CFL or a 100-watt Incandescent Bulb

COOLER OPERATING TEMPERATURE
The attachment of the silicon chips directly onto the aluminum plate results in heat dispersion of up to 97%, allowing the lamp to operate in a cooler environment, saving more energy

5-YEAR WARRANTY PERIOD
The manufacturers of the GES 4th Generation LED Lamps assure consumers of product quality with a guarantee of 5 years. 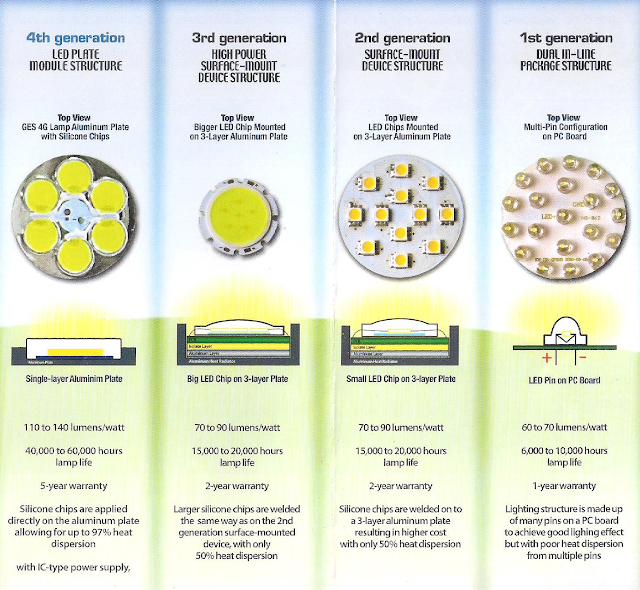 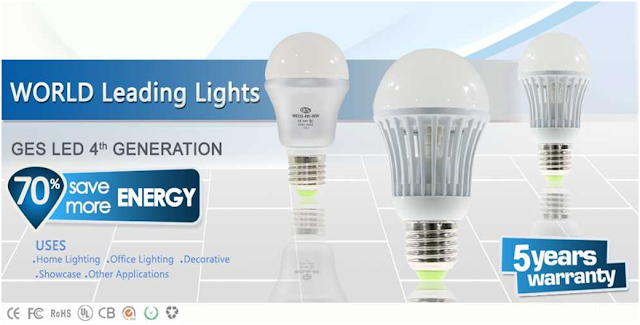